By For Post Management! on October 1, 2013 in In Graphic Detail 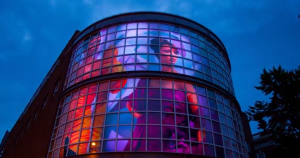 It was 55 years ago that, overcoming a great deal of adversity, Eunice Johnson began her legendary Ebony Fashion Fair: a traveling show featuring African American models in designer clothing by world-renowned talent such as Oscar de la Renta, Christian Dior, and Yves Saint Laurent. This event was not only remarkable due to its scope and the talent involved, but this served as yet another step towards ending oppression: involving the African American population in an aspect of mainstream culture traditionally unreachable to them.

To celebrate this momentous event, the Chicago History Museum is hosting “Inspiring Beauty: 50 Years of Ebony Fashion Fair” now through January 5, 2014. And, wishing to give some special attention to truly bright aspect of Chicago’s past, the museum gave us a call to see if we could shine some light on it. 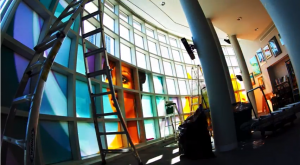 By mounting Lintec film, a clear window coating that attracts ambient light, on the interiors of 180 of the museum’s windows, we created a glorious, glowing, detailed display highlighting a scene from the Ebony Fashion Fair.

“Not only is this project special because of its prominence: this window mural’s going up at the corner of North Avenue and LaSalle – an incredibly busy intersection downtown,” said Alan Schellerer of ER2 Image Group (Formerly Bloomingdale Signs By Tomorrow), “But this is a chance to create something that’s experienced as a piece of art. It’s captivating, and it’s exciting to be a part of something that has the potential to mean so much to so many people in that neighborhood.”

Requiring no electrical signage, no LED technology – no electricity whatsoever –Lintec film illuminates from the inside, creating a vibrant LED effect without endangering drivers. There is no movement, no change in image, no text — no distraction other than the awe one may feel driving by.

To add even more vibrancy to a project, lights can be installed to highlight certain aspects of a mural; The Chicago History Museum added LED spotlighting on its interior to make their graphic “pop” even more.

The museum’s massive image was printed in blocks, piece-by-piece on our UV curable flatbed printer with white ink capabilities. The technology is ideal for applications like this and for retail stores looking to display vividly at night.

To check out the installation and the beautiful results of the Chicago History Museum’s Lintec window film display, click here. Complete with time-lapse footage and the nighttime effects, you won’t want to miss this clip. 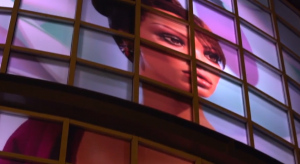 To inquire about Lintec window film and our other technologies, don’t hesitate to Contact Us; we’ll be happy to answer any of your questions.

Finally, if you wish to learn more about The Chicago History Museum’s “50 Years of Ebony Fashion Fair”, just click to be taken to the website.

We sincerely thank The Chicago History Museum for this tremendous opportunity… and we look forward to “brightening up” your next project.

Revel in the Glory of Our Rentals: New Cost-Saving Options to Consider When Planning Your Next Event
Out With the Old, In With the New: Announcing The Retirement of Our HP Flatbed